Tennessee-based Erlanger Health System—the seventh largest public healthcare system in the United States—attacks new IT projects, such as the recently underway EMR install, with an extra dose of discipline. That’s probably due to the company’s chief information officer David Peterson and his military background.

For more than twenty years, Peterson served Navy Medicine as a medical service corps officer, initially as an administrator overseeing medical records and managed care. He then helmed a multimillion-dollar IT deployment project stateside, as well as in the European theater, moving on to do the same for the Marine Corps supported by Navy Medicine. Finally, he earned a spot as CIO for the National Naval Medical Center, known as “The President’s Hospital.” In 2001, he retired from the navy and embarked on a civilian career.

But while Peterson won’t discount the influence that the military’s culture of discipline and regimentation had on him or deny that it migrated to his civilian work, he is quick to point out that, when it comes to medicine, there are vastly more similarities than differences in the two sectors. “Military medicine is medicine,” Peterson says. “With operational warfare, it’s a much more regimented environment. But in hospitals and clinics, it’s all about the patient’s care. You could have a navy captain physician treating an enlisted sailor in that bed, and it’s a patient-physician relationship.” 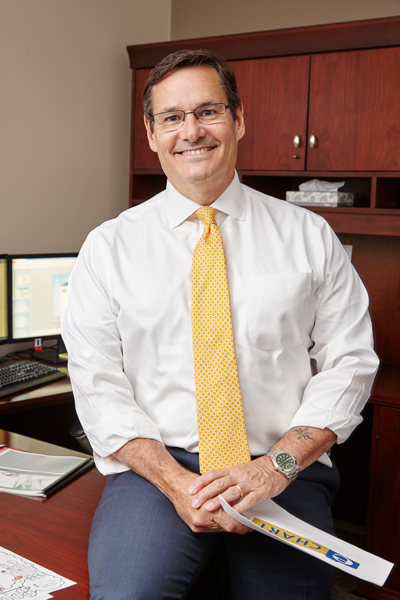 Peterson approached the transition thoughtfully and carefully, making sure that the work he took on allowed for a clean transfer of skill sets. While he transitioned from being a military officer in khakis to wearing a suit and tie for the University of Maryland Medical System, Peterson says it was essentially the same job. “The only difference was getting to work at eight o’clock, whereas at the National Naval Medical Center, I was attending Admiral’s Call at six thirty,” he says. “I still had to deal with providers, patients, and their families. Actually, the hardest part of the transition was deciding which tie went with which suit.”

After working for several different health systems and running a consulting firm, Peterson joined Erlanger in September 2015 as senior VP and CIO. He calls himself a “turnaround CIO” who has expertise in stabilizing IT departments that need guidance. To that end, he maintains an open-door policy with staff and lets everyone, whether it’s a director or an analyst, know that they are involved in all decisions. This includes going to various members of the staff and asking what they think about pressing projects before presenting the idea to his leadership team.

“You get the most out of people when you treat them with respect,” he says. “I was like that in the navy, too. Even though I was an officer, I never used my rank to get something done. It was always a team approach.”

Peterson views IT as an intimate part of the caregiving process, rather than a detached unit. He sees the relationship between IT and clinicians as a partnership. At the end of every monthly IT staff meeting, Peterson reminds his staff that although they are not caregivers, per se, they play an important role in the patient care process. “We support the tools we give the clinicians to help patients,” he says. “In that way, we help provide care for the patients, and we can hold our heads up high. I never talk about IT in general. Everything is always in the context of overall clinical and business strategy.”

“You get the most out of people when you treat them with respect. I was like that in the navy, too.”

Peterson and his staff have completed roughly 30 percent of an Epic EMR install. Once the project is complete, records that used to require accessing multiple systems will be streamlined into one. A doctor or a provider will be able to follow the entire continuum of a patient’s care in one record, thus giving a clearer picture of a patient and saving healthcare professionals enormous amounts of time and effort.

In the end, all of this effort benefits the patient at the hospital. Peterson believes that information technology has radically transformed the patient experience overall, not only by increasing efficiency on the operational level, but also in terms of the amount of health information that is now so readily available.

“It’s opened the eyes of the consumer,” he says. “The patient has become a player in their care through access to medical records and all the information on the Internet. They come into a doctor’s office fully prepared, with different options of treatment. Providers have to be careful. A small community hospital could be competing against clinical research data downloaded from Johns Hopkins, and the patient might second-guess that physician.”

Peterson is one of seven senior executives on Erlanger Health System’s senior executive team, an indication of the degree of respect IT is granted within the system. Whether it’s clinical initiatives or the acquisition of a new physician practice, the other executives always look to IT as an important player in integration, Peterson says. “If they want to go somewhere and I can’t support it technically, there will obviously be a problem getting there,” he explains. “With quality initiatives and financial goals, we have to provide them with what they need to be successful.”

As he drives the organization forward, Peterson depends greatly on the lessons he learned in the military, not the least of which is that, though contexts may differ, medicine is always medicine. “The environment might change,” he says. “A civilian hospital is different than a wartime environment with jets flying off the carriers. But at the end of the day, medicine is always about the patient.”

An Unorthodox Approach to Human Care

The Power of Service

Karena Weikel Is Leading the Way to Affordable Healthcare