Given the nature of its business, you would expect GE Healthcare to have physically healthy employees. Jason Morgan is tasked with maintaining their wellness, but his program factors in far more than a body mass index—it considers happiness a measurable value.

Jason Morgan is just one of the thousands of people across more than fifty countries that GE Healthcare employs, working from a divisional base in Waukesha, Wisconsin. Yet Morgan is also an entire department—one that aims to reinvent healthy workplaces for the medical-device and supplies manufacturer.

Still, the director of global health and wellness does not feel in over his head. Morgan approaches his workdays with overt, bottomless enthusiasm. And while the wellness of 55,000 employees rests on his shoulders, he claims to get all the assistance he needs from advanced technologies, engaged company leadership, an evolved concept of what constitutes employee health, and inspiration from big thinkers on what makes for healthy people and happy workplaces.

Wellness programs in the corporate world, historically speaking, have achieved mixed levels of success. Office wellness typically conjures thoughts of periodic visits by a nurse to take blood pressure readings or to measure for body mass index (BMI). That falls way short of what promotes employee health, according to Morgan. For starters, the things that might make people sick in India are often different from those in the United States.

“This is a global company,” Morgan says. “We needed to find something that works across cultures and countries.”

So, when Morgan was brought in to build and lead the program, he proposed something completely new. He said it was essential for the health-oriented company to create a culture of health that isn’t just about physical metrics. 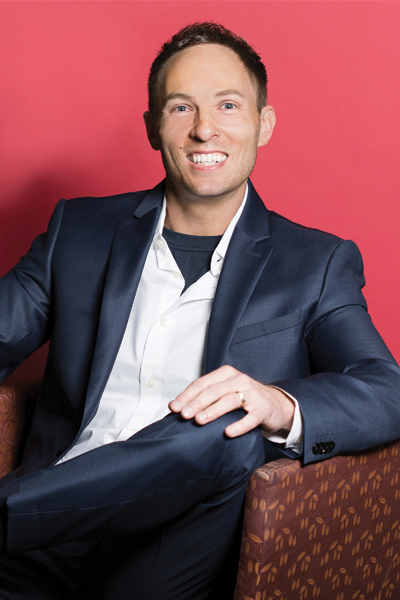 “This is a global company. We needed to find something that works across cultures and countries.”

His audacious proposal was that employee wellness be defined in four pillars: physical, spiritual, emotional, and social. The physical is fairly obvious. The spiritual is not about any specific religion—the company is massive and global—but instead answers the questions of, “What do you believe in?” “What energizes you?” and “What are you passionate about?”

Emotional health is “resilience and mindfulness,” he says. “How we react and adjust to difficult situations is critical to our personal and team success, as well as overall health.” The social pillar, meanwhile, means “having healthy relationships both personally and professionally, and having support inside and outside of the workplace.”

This last pillar, involving coworkers and family members, finds backing in several quarters. One particularly vocal proponent is physician and social scientist Nicholas Christakis, a professor at Yale University and someone who achieved fame a few years ago with his 2009 book Connected: The Amazing Power of Social Networks and How They Shape Our Lives. Widely cited for how it shows obesity occurs in clusters of friends and families, Christakis’s book also illustrated how influencers can affect positive health outcomes.

Morgan employs this concept of social support—call it an “enhanced workplace culture”—through several tactics. One is a smartphone and desktop app that provides personalized advice, text notifications, tracking through wearable device integration, and feedback based on personal profiles and interests. It also allows employees to connect all over the world in fun programs and challenges.

About a dozen of the company’s larger locations have on-site fitness centers, while all locations provide some or all of the following: breathing and meditation classes, nutrition programs, personal training, reimbursement for health-club memberships, and healthier-eating cafeterias. And every worksite with 100 or more employees has at least one in-house wellness champion.

“How we react and adjust to difficult situations is critical to our personal and team success, as well as overall health.”

It didn’t all happen at once, and it’s constantly changing. “We developed this over four years,” Morgan says. “We focused on creating healthy environments, engaging leaders, and identifying key stakeholders and vendors, which all help support our programs.”

Some of the more innovative tactics arrived with Morgan. He recalls, for example, a conversation with colleagues in Bangalore, India. “There was a lot of noise in the background and I asked what it was,” he says. “It was a combination of outside traffic and inside office noise. The team said that by the end of the day, they’re exhausted and stressed due to the noise pollution.”

Morgan managed to convince the site manager to soundproof, recording studio-style, a room in the building that accommodates eight workstations and a ten-person conference table. Shortly after, an employee survey found that 99 percent reported less stress and more energy from working in the quiet space.

The brutal winter weather of Wisconsin was the impetus for another of Morgan’s ideas. Because snow and cold noticeably reduced employee walking at that time of year, Morgan created an “active meeting room” with four treadmill-desk stations that face each other. It’s proved so popular that it is booked two weeks in advance, and the concept is expanding to other offices.

Are these tactics yielding a return on investment? The web-based platform alone cost $100,000 to build, while the on-site health clubs cost a multiple thereof. However, all 55,000 employees, including family members, have access to the wellness platform.

Morgan used a traditional model for measuring results in 2015 with 300 employees participating in a weight-management program. Applying a value of $202 per point drop in BMI, the company saved $57,000: enough to suggest an expansion of that particular program. But that measure is incomplete, and some, including Morgan, would even say misleading; BMI only factors for height and weight measurements, which fail to account for muscle density in fit people. “There are plenty of thin people who are unhealthy,” Morgan notes.

This is where the emotional, spiritual, and social pillars factor in. Morgan has his own “VOI,” or value on investment, which essentially measures happiness as a contributor to retention. “When you consider it can cost between $15,000 and $20,000 to hire people, along with increased responsibilities for the other team members when someone leaves, employee retention takes on an even greater importance,” he says.

“I’ve developed this program internally, but it’s based on research out of the University of Wisconsin,” he says, referring to the work of Dr. Richard J. Davidson, founder of the Center for Healthy Minds at the school’s Madison campus. “We focus on happiness performance measures, behaviors, relationships, and the work environment, scoring each location based on a survey that employees fill out. The survey produces a happiness score based on the responses, which we aggregate. We can then determine best practices, which can be shared with other sites and leadership.”

Other research backs up this approach. A 2014 article in the Harvard Business Review by Annie McKee, a senior fellow at the University of Pennsylvania, explored research and surveys that show a great deal of workplace unhappiness exists. Only 30 percent of the United States workforce is “emotionally and intellectually committed” to their employers, she says. “Nearly one out of five employees is actively disengaged. . . . Disengaged, unhappy people aren’t any fun to work with, don’t add much value, and impact our organizations—and our economy—in profoundly negative ways.”

Perhaps happiness is the true foundation of a successful enterprise. Either way, Morgan is happy to find out how far it can take GE Healthcare. AHL

Editor’s note: Shortly after press time, Morgan accepted a new position as senior manager of health and wellbeing at Mars, Inc. AHL wishes Morgan the best in his new role.

Bill Dinger Is Committed to Quality

Rebecca Gristina Knows What Matters Most

Gregory Pardo Is Up for a Challenge