Lisa Martinelli already had two successful careers in the works when she took her first shot at higher education. Two degrees later, she’s improving patient lives as VP and chief privacy officer at Highmark Health while pursuing her PhD.

Lisa Martinelli had a thing for “bling” before it was a slang term. As a girl, she would cut out catalog photos of jewelry and attach them to her ears and fingers. When she was fifteen, she became a jeweler’s apprentice and worked every night after class throughout high school.

By the time she graduated, Martinelli had been recruited by a national fine jeweler, and was eventually transferred to a store in Beverly Hills. It was the beginning of a robust career in fine jewelry retail sales and design, where she built a strong list of loyal clientele. It was also where she learned the importance of building trust and the art of listening.

When her mother suffered a minor stroke, Martinelli put in for a transfer and moved back home to Pittsburgh. Meanwhile, one of her California clients in the health and fitness industry had invited Martinelli to purchase licensing rights to a fitness-center franchise. Because Pittsburgh was a new market, she decided to open a franchise and run her own business—all while continuing to practice as a jeweler. 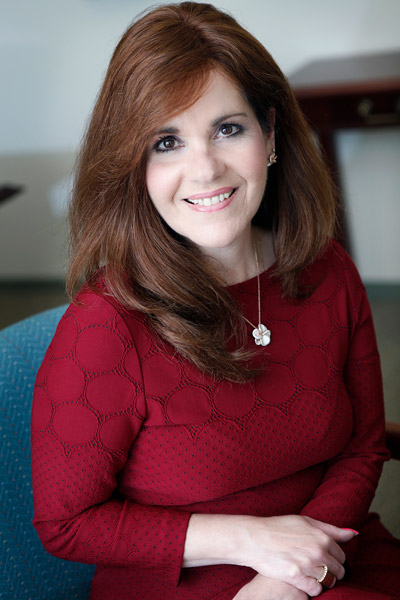 Martinelli ran a successful business for four years and learned much about management and entrepreneurship. But as she developed relationships with attorneys, bankers, and other experts who helped her along the way, she noticed a nagging feeling that part of her wasn’t quite developed.

“I looked at my attorneys and thought, ‘I can do that,’” she says. “And for the first time, I realized what I was missing without a college education.”

So, in her mid-thirties, Martinelli started her undergraduate education with the intent to continue into law school. She immersed herself in her studies and graduated first in her class with a bachelor’s degree in philosophy and political science from the University of Pittsburgh. In the meantime, Martinelli began to care for her mother, who had then been diagnosed with breast cancer. That first-hand consumer’s look at the healthcare delivery system became the catalyst for her choice to earn a degree in healthcare law from the University of Pittsburgh School of Law.

Not long after law school, Martinelli was recruited by Highmark to help develop their privacy program. Up until then, privacy had been considered a vague and largely undefined “best practice” in the healthcare industry, and there were very few experts.

But from the time she was wearing cutout paper earrings and bracelets, Martinelli understood Highmark to be a trusted name in health insurance, and even though privacy was an unknown and potentially intimidating way to start her new career, she was confident that the company would take good care of her. So, in 2002—the same year that HIPAA was signed into law—she came on board as a privacy attorney.

“My experience with my mother during her diagnoses has been a driving force behind my work. I saw what it means to be a consumer of healthcare and the importance of transparency.”

In every step of her career, education, and life in general, Martinelli’s faith has been an important guide. Inspired to encourage another generation in the same way, she began teaching religious education to second graders at her church in 2001, the year before she joined Highmark.

But while she found great joy in teaching, her own curiosity crept over the next decade, and she found herself bothered once again by a nagging feeling that something was missing. In another step of faith, Martinelli turned again to education earning a master’s degree in pastoral theology from Duquesne University.

During the last year of her theology program, Martinelli’s young nephew was diagnosed with autism—yet another reminder of the fragility of health and importance of a good healthcare system. Because faith, learning, and health are three of Martinelli’s core values, she created a disabilities program to encourage faith formation in children with autism, developmental delay, and special needs. She developed and launched the program as part of her theology practicum, and several years later, it remains a vibrant, active ministry in her local congregation.

Over that same decade, Martinelli was promoted to chief privacy officer at Highmark, and she developed its privacy program into one of the most mature and respected in the industry. A few years later, she also realized that instead of quenching her thirst for learning, her continuing education had only heightened it. So, she decided to pursue her PhD in healthcare ethics and is currently a candidate with a focus on moral agency and stakeholder theory in organizational ethics.

Martinelli is now in her fifteenth year at Highmark and has seen privacy go from a good idea to a regulated environment and all the way to what she and her team are establishing now: a sustained culture among Highmark Health’s 38,000 employees. The organization has also added the Allegheny Health Network integrated delivery system to their footprint, and Martinelli is now responsible for privacy throughout the entire enterprise.

“We live in the phenomenon of an information age,” Martinelli says. “Data is the fuel that gives us what we need, and in healthcare it’s especially powerful.” But if it’s unfettered, that same data can create great harm, which is why Martinelli and her team hold themselves to even higher standards than their customers do. “Our goal is to address privacy and data use responsibly, legally, and ethically, with the goal of preserving customers’ trust and exceeding their expectations,” she says.

“My experience with my mother during her diagnoses has been a driving force behind my work,” says Martinelli, whose mother’s fight with cancer and dementia finally ended in May 2016. “I saw what it means to be a consumer of healthcare and the importance of transparency.”

Thinking about consumer needs has come naturally to Martinelli since her retail days, and the listening skills she developed back then are every bit as crucial now as she empathizes with customers, physicians, and the twenty-three members of her team. When she needs to make a tough decision for the greater good of the company, she is reminded of her training as a business owner who needed to keep the lights on.

Her education in philosophy is a daily reminder that there are consequences for actions, which is why transparency and cultivating a culture of privacy are essential. Her faith and study of theology is what grounds Martinelli, and motivates her to look beyond herself to the greater good. And her most recent training in ethics drives home the point that, “just because we can do something doesn’t mean we should”—especially when it comes to data use.

Highmark Health strives to put the customer at the center of every action and “change healthcare one patient at a time.” For Martinelli, that vision is only possible when it’s put into action at a cultural level. To do so, she makes it her mission to empower her team, feed her unquenchable desire to learn, and always find the beauty in the littlest things. AHL