When Leslie Whitehorne came to Mako Medical in 2018, she was introduced to the Predictive Index, a behavioral assessment based on sixteen individual profiles that helps leaders better understand their people and people understand themselves. Whitehorne, who has served as the vice president of revenue cycle management and process management for the last year-and-a-half, says her profile wasn’t all that surprising to her.

“My profile is ‘The Captain,’” the VP says with a cool Carolina drawl. “It’s a person that is a natural leader and tends to have that mentality and mindset. That said, I’ve had some amazing leaders along the way who have helped me grow and have left such a strong impression by how they treated and encouraged me.”

The strong female leaders the VP encountered early on have had a lasting impact on Whitehorne’s own approach to leadership—and the knowledge that building the right team is the most surefire way to avoid micromanagement. More importantly, though, those women gave her the opportunity to build out expertise in spaces that were completely new to her.

Whitehorne earned her ‘Captain’ stripes early on in her career when she was tasked with helping build a new lab from scratch. She’d never created an entirely new billing department; she didn’t have that much billing experience period. But she relished the opportunity, learning lessons along the way that would undoubtedly serve her well at Mako. 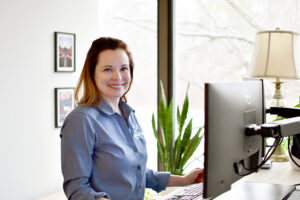 The VP has since had the opportunity to architect several large-scale integrations at Mako that are introducing new efficiencies and redefining how technology can aid the revenue cycle team. One of them is Availity, a software solutions program geared for healthcare.

Another is TELCOR, which Whitehorne previously helped integrate into her former lab and has now been able to refine as a system at Mako. “Everything they do is lab-specific,” the VP explains. “They know the lab legislation, and they’re constantly looking for what’s coming next and designing based on that outlook.”

“Leslie’s remarkable leadership has made a significant impact in reducing denials and streamlining her revenue cycle processes. Her strategic approach and collaboration with our team to use Availity Essentials Pro analytics tools to spot trends and build processes to address them quickly has yielded great results for her organization,” says the Availity success management team on its collaboration with Whitehorne.

Whitehorne says that TECLOR’s commitment to continued training and payer issues made them an ideal candidate for a partnership with the lab. TELCOR will also be able to integrate with an additional partner, FrontRunnerHC, a leader in patient insurance verification that can help locate insurance information, report back to TELCOR, and automatically update the account.

“We’ve hired so many interns over the years that have turned into great employees.”

The goal is obviously to decrease the amount of time individual employees have to spend tracking down accounts and doing due diligence prior to billing. Leaving time for higher-level work isn’t just good for job satisfaction, it’s good for business.

Whitehorne’s counterparts at TELCOR celebrate the VP’s expertise, as well. “Leslie brings her A game to every new opportunity,” says Kurt Matthes, the VP of reengineering and service at TELCOR. “Building upon her experience as a strong leader with experience across multiple disciplines, she was able to intuitively leverage her team’s talents to overcome barriers and drive positive outcomes. She is a powerful force in the pursuit of success.”

Whitehorne also is looking to the future of the billing department, taking an active interest in future employees that come through Mako’s internship program. Interns can try out multiple jobs within the department to find where their strengths lie and also receive some direction as to how their careers can evolve.

The program has multiple upsides. “We’ve hired so many interns over the years that have turned into great employees,” Whitehorne says. “They’re eager to learn and progress. Even if we don’t get to keep them, I think the program here is a strong one that provides some amazing experience.”

Whitehorne empathizes with the interns: she remembers the challenges she faced early on in her career where she wanted experience but job listings required the very experience she was seeking out. The internship program is a remedy to that catch-22, which can make early employment so hard to come by. Not only do Mako interns gain valuable experience, but they might even wind up with a job at the end of the program.

“I’ve never seen a company that spent so much time doing service for others. . . . There’s a huge commitment to the culture here and the role we play in the community.”

The VP notes the culture of Mako is that of a start-up, despite its growth and expansion. The X factor, though, seems to be the family atmosphere that Whitehorne says has been prevalent since her first day over three years ago.

“I’ve never seen a company that spent so much time doing service for others,” Whitehorne says. “The amount of volunteering, the number of veterans we hire, and everything down to a Bible study group . . . there’s a huge commitment to the culture here and the role we play in the community.”

Whitehorne says the bottom line is often the only line that companies worry about, but she says Mako has achieved incredible success while considering many other issues as vitally important to company success.

That focus on culture was more important than ever during the pandemic, and Whitehorne emphasizes that Mako’s leadership has done everything it can to make life as flexible for parents and caregivers as possible. A single mother, Whitehorne knows firsthand the challenges that have accompanied school shutdowns and upset schedules, and she herself forwarded the need to bend wherever possible.

Whitehorne has helped weather the COVID era by keeping her office door, virtual or otherwise, open to whoever needs it. She’s not just a natural leader when things are good.

Leslie Whitehorne is a captain for all seasons.

FrontRunnerHC congratulates Leslie Whitehorne on this well-deserved recognition! We’re honored to partner with Leslie and Mako Medical to support their mission and success. Our software platform provides instantaneous access to patient demographic, insurance, and financial information to help organizations get paid for their services while enhancing their patients’ experience. FrontRunnerHC.com

Tracy Williams has an Eye for Efficiency

Karena Weikel Is Leading the Way to Affordable Healthcare