Stretching across La Veta Avenue in Orange County, California, is a skyway that connects CHOC Children’s to nearby health facilities. The skyway serves as more than just a walkway, however. Vice President and Chief Information Officer John Henderson says that it is the link between his work and his purpose, and at times has also served as a difficult proving ground for potential new employees.

“Before I came here, there was someone that was interested in a role but had never been in pediatrics before,” Henderson recounts. “When the interview was over, they were given a tour of the facilities and walked across the bridge. You see a lot. You see children connected to IVs; you see children doing therapy. And the person said, ‘I don’t know how you do this every day.’”

That candidate, understandably, didn’t work out. And Henderson says that’s OK. The everyday heartbreak of encountering sick children can be too emotionally overwhelming for some to handle. But Henderson is a different cut.

The CIO has spent the bulk of his career supporting clinicians and healthcare organizations whose primary focus is improving the lives of children combatting illnesses that have come far earlier than any deserve. “For me, walking across that bridge and being around our patients is so important for me to see,” Henderson says. “It reminds you of the importance of what you’re doing and why you’re doing it.”

First a Stop Gap, Then a Home

Henderson didn’t set out to build a twenty-four-year career supporting pediatrics. He interviewed at Texas Children’s Hospital for a supervisor position at the behest of his brother-in-law. Had his in-law been in insurance or construction, Henderson would have probably been just as likely to interview there. But five promotions later, the AVP was overseeing all IT operations for the huge organization.

Y2K compliance, a new ERP implementation (a rapid fourteen-month accomplishment), and a progressively more client-focused set of responsibilities became part of Henderson’s purview. “I hadn’t actually spent much time in the hospitals seeing the caring deliver up close, but eventually I had to start meeting with leaders responsible for clinical operations,” Henderson says.

Like new hires at CHOC, Henderson was taken on tours of the facilities early in his career that he spent many years supporting, which gave him the real feel for his actual client base—the patients, their families, and the caregivers.

“That’s what finally made me decide I was going to stay in healthcare,” Henderson remembers. “When you actually see what’s happening on the care delivery side, there’s just no way you can’t be amazed by it. I think that was so important for me from a career perspective in figuring out where I belonged.”

In growing in his role, Henderson credits Texas Children’s Hospital Chief Information and Information Innovation Officer Myra Davis with helping him grow into the leader he hoped to be. “That first year with Myra, my performance rating was nowhere near what I had become accustomed to,” Henderson says, laughing. “But I grew and did more than I had ever done prior to that. I wouldn’t have been ready for this role at CHOC had it not been for her.”

In coming to CHOC in 2017, Henderson faced a peculiar type of challenge. His former organization was nearly four-times the size of his new employer, but the new CIO saw it as an opportunity in waiting. “I understand scale and what it takes to transition from a mid-sized organization to grow into a large health system,” Henderson says. “I’ve also worked in literally every area of IT, whereas I think in technology people tend to pick a lane and stay in it. I think that experience has provided a tremendous benefit here.”

The most recent projects for Henderson have been seeking technological solutions to keep patients’ parents and clinicians on the same page and improving how patients experience CHOC’s services. “We’re really focused on engagement with our patients and some point of service and post-visit activities,” Henderson explains. First, we are transitioning to a data capture process that seamlessly integrates back into the CHOC EMR, allowing less legwork for inputting and scanning patient information and making it more readily available for clinicians.

“There is this connection between the community and the organization. We don’t just look after our patient population; we actively work to serve the community of which we are part.”

Instead of seeking that information via the traditional stack of forms patients receive upon arrival, those questionnaires are now sent via text message to parents to fill out in advance. “We also work to make that process as brief as possible,” Henderson says. “If you have to spend more than five minutes inputting information, people are simply going to get distracted and not finish.”

Check-ins and appointment reminders can now both be accomplished via smartphone, or, for check-ins, via on-premise iPads. Tablets have also been rolled out for young patients to watch movies or television, listen to music, and, in the future, read up on provided educational materials about their conditions or therapies.

The near future provides more opportunities. “We’re in the initial phases of mobile bill pay, co-pays, and will follow those with direct scheduling,” Henderson says. “We didn’t choose that piece first because that’s the heaviest operational workflow impact and we wanted to implement capabilities that were easy to adapt before we moved ahead with larger projects.”

A Culture Dedicated to Serving Children

There was another driver for coming to CHOC for Henderson, other than his first CIO position. “There is a culture here that you recognize immediately,” Henderson says. “There is this connection between the community and the organization. We don’t just look after our patient population; we actively work to serve the community of which we are part.”

That includes valuable partnerships with the Los Angeles Angels, the Anaheim Ducks, and Disney, who hosts the annual CHOC Walk through Disneyland that draws over fifteen-thousand supporters each year. “Some of those walkers are parents and current patients, but we also have so many parents who have lost children,” Henderson says. “They bring so many people out to support CHOC and the amazing work our physicians and clinicians do for the patients that come through our doors, and it’s just amazing to see.” 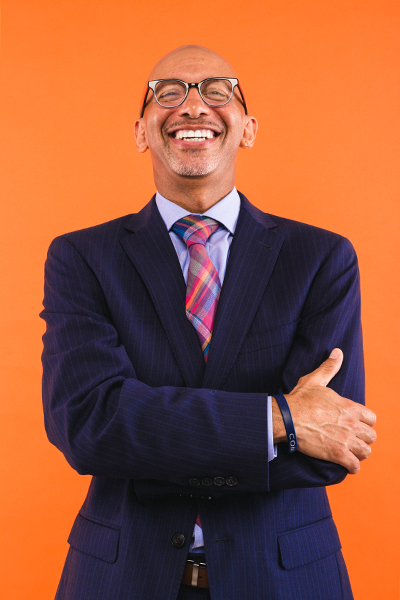 Working on behalf of children, Henderson admits, provides a sense of urgency that many people might find emotionally draining. “If I’m unsatisfied with a vendor in our portfolio that is part of our clinical care delivery ecosystem, sometimes they need a reminder that in healthcare you are dealing with literal life and death situations,” the CIO says. “We don’t make things; we take care of the sickest of the sick. This has to do with taking care of children, and it’s our job to make sure that our incredible clinicians and physicians have the tools to do that.”

Luckily, partners like ePlus Technology know what’s at stake. “ePlus is very fortunate to have developed a strong relationship with John Henderson that goes back fifteen years to when he was an executive at Texas Children’s Hospital. During this time, John has consistently showcased his ability to be a forward-thinking leader who fosters a culture of true transformation and accountability,” says John Karle, senior account executive at ePlus. “His reputation has attracted other industry leaders to his team. With professionals like Adam Gold, Curtis Hendrick, and Anthony Lakin, they consistently innovate and deliver true value to the organization.

“While at CHOC, John continues to guide his team to leverage available technology to facilitate better patient care and create an amazing environment for children in need,” Karle continues. “His continuous commitment and passion deserve applause.”

Not everyone might have the mindset to work in a job that has the opportunity to encounter this type of heartbreak on such a consistent scale: children having to tackle life’s most difficult challenges at a time when they should be more concerned about toys or school. Alternatively, Henderson and his team get to see their work enabling recovery, instilling hope in patients’ healing, and providing the chance for a better future for thousands of children each and every year. It’s that purpose that transforms a walk across the skyway today into a pathway toward a brighter tomorrow.

With the highest certifications from top technology partners and lifecycle services expertise across key areas such as security, cloud, data center, networking, collaboration, and AI/ML, ePlus partners with healthcare organizations to enable these technologies to become strategic assets with regard to patient care and experience. Featuring an array of flexible technology consumption models to align with ever-changing fiscal budget requirements, ePlus works closely with key executive stakeholders across departments to enable doctors, nurses, and physicians to focus on providing positive outcomes for healthcare organizations and their patients.

ePlus is proud to partner with John Henderson, Adam Gold, and the world-class IT team at CHOC to help support their unwavering mission—to nurture, advance, and protect the health and well-being of children.

David Kizner on Leading in Health Tech at Viz.ai

Christian Aboujaoude Plans for the Future