At a young age, Steve Bertram lost his father to a sudden, unknown illness. Later on in childhood, Bertram would read about a local Michigan company called Upjohn and how the company’s medical innovations helped people. The ability to help others strongly appealed to Bertram and continued to stick with him as he grew professionally with several jobs in the healthcare industry. This also set Bertram on a path to a mission-driven career at an early age, eventually landing him at his current position as senior vice president of global human resources at Atara Biotherapeutics.

After obtaining his MBA from Michigan State University, Bertram started working at Upjohn full time. While there, he contributed to their work to fight ALS. After several years at Upjohn, he felt it was time to move on after Coca-Cola had been trying to recruit him for more than a year.

At the time Bertram made the move, Coca-Cola’s human resources program was held in high regard, and he felt like it was a great opportunity for him to put his MBA experience to use, he says. He was also immediately impressed by the company’s strong culture. Coca-Cola was very successful, in part, because of its core principle to “compete intensely and win,” Bertram says.

After working for the soft drink juggernaut for a couple of years, Bertram was ready for another change. His time at Coca-Cola made him realize how important a company’s mission was to him, and he kept this in mind as he moved on to other opportunities.

He chose to go to biopharmaceutical company Amgen, despite the fact that it required a cross-country move, was in the middle of the pack of the offers he had received financially, and couldn’t offer him a grand title. But Bertram didn’t care about any of that; he cared about what the company was doing to help patients.

After working outside of the industry for a few years, Bertram had a strong desire to get back to the mission-driven nature of the healthcare industry, he says, because doing impactful work “helps you get through the hard days.”

The move to Amgen made sense to him on both a professional and personal level because Amgen was also working on treatments for ALS, a disease Bertram is passionate about. His college roommate “succumbed to this insidious condition at too early an age,” Bertram says.

He uses his roommate’s story as an example of how it doesn’t matter what background a person comes from or what kind of character a person displays; anyone can become unlucky in his or her health. His roommate’s health issues also underscored why Bertram has such a passion for working in healthcare. “Every day you wait, it might be a lost life,” he says.

Bertram’s leadership style is steeped in mission-driven values. “I want to enable the 95 percent of employees who are doing the right thing in every way, every day,” Bertram says. He strongly believes that the 5 percent of employees who do not fit a company’s mission usually have everything they need to thrive, and the reason they are not successful is because they are “value felons” who consistently live outside of the values of their unit or company.

Now, after many successful years at Amgen, Bertram is putting his expertise toward his new role at Atara Biotherapeutics. The company works in the immuno-oncology space where it develops treatments to combat serious cancers that occur after transplants and could have fatal consequences.

Atara has offices in four locations, with its corporate headquarters in San Francisco; a major hub for research and development in southern California; another lab set up in Denver; and a fourth location in New York. Creating a unified culture between the four locations has been a challenge, but Bertram relishes it. Bertram says being present at the early stages of Atara’s lifespan has been incredible, and he hopes he can help set the framework for what it will be for decades to come.

In order to begin creating a unified culture between the four offices, Bertram is implementing technology such as video conferencing in addition to emphasizing the importance of in-person gatherings. Making sure that the locations have celebrations such as holiday parties, recognition of milestones, and other bonding activities, he says, has also contributed to a united culture.

Bertram is also focused on increasing collaboration and camaraderie among employees within the same office. To help foster this culture, the company is currently constructing a T Cell Manufacturing Facility in Thousand Oaks, California. The facility will have a mezzanine level where offices and huddle areas will be built to meet the needs of the different units located in southern California.

“Getting great talent is not the problem, getting them what they need to unleash the most of their talents is the challenge,” Bertram says. “We want to become more than a work unit, more than colleagues. We want people to like one another, trust one another, and like where they work.”

Focus on the Present

Between Steve Bertram’s time at Amgen and Atara, he took six months to train for a Mount Everest base camp trek. Despite setbacks caused by an earthquake in Nepal and a knee injury that required surgery two months before he left, Bertram accomplished his goal alongside his climbing partners after a nineteen-day trek.

“Every day I wanted to get on the trail,” Bertram says. He was excited for every day’s challenges, and accomplishing this feat helped teach him how to focus on his breathing, be in the moment, and accomplish the task at hand, a skill he regularly uses while working for Atara. 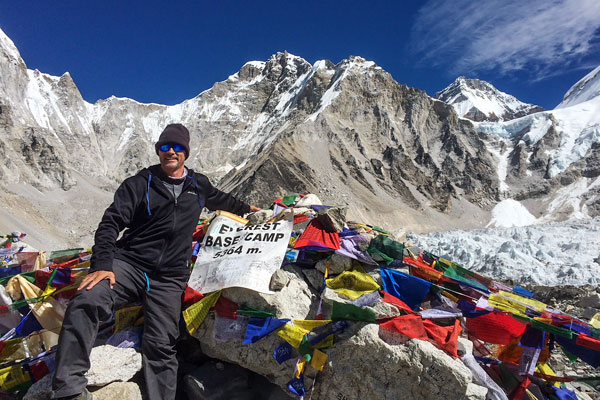 A New Analysis of Government Healthcare

The Culture of Compliance