Jonathan So, senior director, health care initiatives at the Detroit Regional Chamber, grew up in the Detroit area. He went to college in Detroit, at Wayne State University. And he always intended to help make the city and the region around it a better place to live.

It was no surprise, then, that after several years in the banking industry, So joined the Detroit Regional Chamber, an organization devoted to driving economic prosperity in Southeast Michigan, in 2008.

“I loved working at the bank,” So says. “It was a great experience because I was straight out of college and I learned a tremendous amount about how business works. But in the end, the culture in banking just wasn’t for me.”

Needing a change, So’s passion for his hometown drove him to see how he could make an impact. Many local residents’ civic pride is largely born out of the city’s rugged recent history, he says.

“It’s really this idea that we have gone through one of the darkest periods of any American city,” he explains, alluding to the auto industry crisis and Detroit’s bankruptcy filing in 2013. “From that, we’ve developed thick skin and pride about being
survivors. Detroit has had the grit to bring itself back to being a great American city again.”

So jumped into the fray sooner than many. The credit crisis that paralyzed banking in the late aughts led him to take stock of his career and join the Chamber, even at a time when economic revitalization for the city wasn’t on anyone’s radar.

At first, his primary challenge wasn’t stoking economic development—it was simply helping existing businesses stay open by advising them on how to save money on their healthcare expenses. A large part of So’s job is to establish and communicate the common vision for healthcare and healthcare jobs in Southeast Michigan.

“It’s a lot of work,” he says. “I have to win people over every day to share in the future vision of Detroit’s healthcare economy.”

It was difficult for So to adjust his mind-set about his work. “Banking has a very established way of doing things,” So says. “There’s a tried-and-true method of finance, a lot of which was about risk aversion and making sure we could get paid back for things.”

That outlook wouldn’t work at the Chamber, however.

“You have to be really nimble, flexible, and fast,” So says. “I wasn’t experienced at making decisions on things and having the autonomy to do that.”

But the leadership at the Chamber allowed him to make his case for projects he felt
passionate about and move forward with ideas he really believed in. Sometimes, he says, there was no precedent for what he wanted to do.

“This job has challenged me to increase the amount of risks I was willing to take,” he says. “My mentors and the organization’s leadership have shown me that more risks you take, the greater the outcomes.”

Now that the economy in Southeast Michigan has stabilized, new challenges have cropped up. The passage of the ACA in 2010 had everyone in the local business community asking questions.

“The Chamber didn’t take a political stance on the ACA, but I think we wanted to make sure our members and their employees had as much information as possible on how to prepare for it,” So says. “We had to make sure we communicated this complex law as capably as possible.”

But if there’s anyone who can do it, it’s So. He is as passionate about healthcare as a growth engine in the region as he is about the area itself. Step one, he says, is expanding the perception of Detroit beyond its status as an automotive hub. Along with industries like defense, agriculture, and tourism, So believes that healthcare is vital to Southeast Michigan’s economic growth.

“Detroit has had the grit to bring itself back to being a great American city again.”

“There are 330,000 healthcare-related jobs in Southeast Michigan,” he says. “That’s bigger than any other industry here, including automotive. Healthcare is important. It keeps people healthy and it keeps us working.”

Getting that message out is one of three components in a new initiative that So is leading called HealthForward. HealthForward is comprised of employers, stakeholders, and health professionals working together to drive healthcare innovation and talent to Detroit. The initiative works to build the healthcare innovation ecosystem in the region, cultivate collaboration, and improve community well-being through placemaking and stronger infrastructure.

Another component of the initiative is putting patients at the center of healthcare consumerism. “I believe that the patient should be empowered to make wise healthcare
decisions, both clinical and financial, and I don’t believe there are resources to do that yet,” So says.

He is focusing on making patient behaviors good consumer behaviors, equipping them with the information they need when seeking care, and redesigning a system in which the right decision is easiest.

So is also working on engaging millennials, who have no preconceived behaviors when it comes to seeking and receiving healthcare. 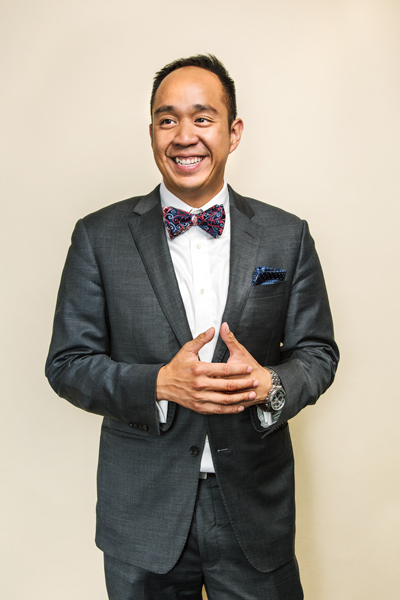 “It’s a blank slate to create new positive behaviors,” So says. “If we don’t do something now, they will do the same things previous generations have done, and that won’t work in the new system. This is our opportunity.”

The third component of HealthForward is focused on population health, ensuring people in the region have the best chance to be healthy both physically and mentally. He says the main message here is that good health is good business. “It isn’t an expense, it’s an investment and a driver for growth,” he says.

Coordinating these initiatives requires constant communication to ensure that everyone’s efforts have optimal impact, So says. “A lot of people are motivated to do something in healthcare here,” he explains. “There are many people that are just as
passionate, or even more so, than me. I just want to make sure we’re all on the same page in coordinating that future. A lot of things will work only if everyone is moving in the same direction.”

In 2016, Michigan ranked first in healthcare innovation, with two thousand open or active clinical trials, according to data compiled by the U.S. National Institutes of Health. Between 2010 and 2015, Detroit recorded a 44 percent growth rate for medical device-related patents, ranking Detroit fifth among the peer regions, ahead of major medical hubs such as Minneapolis and Chicago, the United States Patent and Trademark Office reported—showing that So’s efforts to position healthcare as a tentpole of Detroit’s economy are paying dividends.

The bottom line for So is that healthcare is a means to make Detroit and Southeast Michigan a better place to live. He’s already made plenty of progress toward that goal, proof that his passion for his hometown is contagious.