Originally a chemist, Roche Diagnostics' chief intellectual property counsel, Mike Young, unpacks the ways in which his former profession applies to his current one

The hectic day to day of people working full time in one field, while studying for a career in a different one, can be challenging at best. When the second career involves law school, “crazy ” might be a better choice of adjective.

Mike Young of Roche Diagnostics can relate, considering he was gainfully employed as a chemist by day when he felt compelled to pursue a law degree by night. “There is a certain rhythm to being busy, though there were also times it wore me down a little bit,” he admits. “But people doing a comparable workload assured me it wouldn’t seem like it had been such a big deal, two years down the road. They said I’d hardly remember it . . . and, in fact, I don’t!”

Young remembers chemistry, though, and the joy of learning how atoms and molecules formed and functioned. He remembers savoring time in research labs, eventually working for Indianapolis-based pharmaceutical giant Eli Lilly. “When you do research in a particular area of chemistry, you can become a world expert in that one little field,” he says. “It’s built on a lot of individual pieces that are all connected in various ways, whether you’re talking physics or chemistry or biology.” 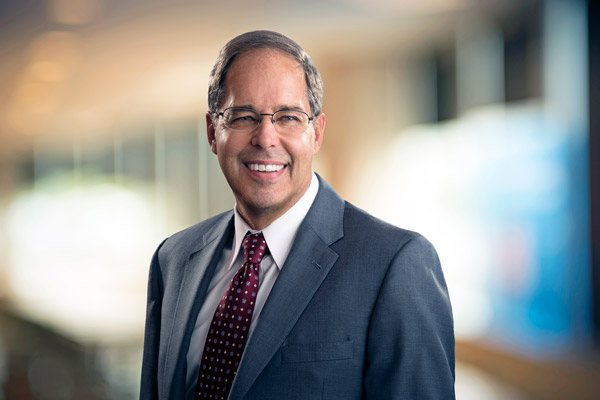 “A good leader is really a good listener, someone who can take your thoughts into account, helping develop a plan to go forward in anything.”

A niche area of the legal world would one day command his attention. Inspired by his father-in-law—a retired patent attorney—Young entered law school shortly before starting work at Eli Lilly and, by the late 1980s, left Lilly for the Indianapolis law firm Baker & Daniels. It was a decision that, a couple years later, landed him at the United States headquarters for the German-based company Boehringer Mannheim, which was acquired by Roche in 1998.

“I enjoyed being a chemist, but like what I’m doing now even more,” he says.

Now known as VP and chief intellectual property counsel at Roche Diagnostics’ United States headquarters, Young has served as an expert in patent law for over two decades. It’s a role that, with its heavy involvement in medical inventions, has him tapping his chemistry background again and again as it allows him to understand the technology involved. “The technology represents facts to which the laws apply,” he says.

Being a patent attorney has also placed him in the middle of more litigation than he ever anticipated. “Once we started developing and selling products, the world started paying attention,” he says. “And when you’re successful, people start to complain.” But countless depositions and trials later, Young counts his litigious experiences among the highlights of his legal career. “It was all fairly nerve-racking,” he concedes, “but by the same token, it remains one of the most rewarding things I’ve ever done.”

The rewards took a different form, one might say, when the Roche/Boehringer Mannheim acquisition came to pass—and the company Young worked for mushroomed to an employee base of 90,000 worldwide. “It’s a lot of moving parts, and a highly matrixed organization,” he says. “And with a matrix, there are a lot of people you have to line up in order to get anything done. It’s the kind of environment that can be challenging, but when you do get something done, you also get a lot of satisfaction.”

One unmistakable accomplishment of Young’s that has emerged is his strong sense of leadership. In the years leading up to the Roche acquisition, he was the assistant patent counsel in a five-person department. Postacquisition, he served as chief patent counsel and later chief intellectual property counsel for a staff that grew to seventeen people in 2014. With many opportunities to embrace an adviser/trainer role, he confesses to being more interested in the up-and-coming lawyers, at times. “Roche isn’t going anywhere—it’s doing fine!” he says with a laugh. “I’m more about seeing our young attorneys do well, and doing whatever I can to help them advance their career development and enjoyment.”

But whether he’s guest speaking at an intellectual property law seminar, getting an article published on the subject, or staying in touch with fellow Roche attorneys worldwide—not to mention those that report to him—Young keeps it simple when it comes to leadership philosophy. He follows what he calls “The Five ‘L’s”: listen to all people affected, learn everything you can about the subject, level with people about the difficulty of the decision, lean in the direction you feel is appropriate so that people know you’re willing to take a stand, and finally, leap forward and never look back.

“Listen” is first on the list for a reason, according to Young. “A good leader is really a good listener,” he says, “Someone who can take your thoughts into account, helping develop a plan to go forward in anything.”

Such skills are more important to him now than ever, as Young is looking to retire in the next few years. He may continue in law part-time, in an advisory capacity, or he might pursue something altogether different. But he’s worked hard to build a productive staff at Roche founded on mutual respect and appreciation—and he looks for it to remain as such, whatever his next chapter will be.

“In many respects, I’ve built up Roche’s intellectual-property law department in Indianapolis from scratch,” Young says. “There’ve been some missteps, some decisions I wish had worked better . . . but what a great learning experience. It’s been an interesting path for me to take.” AHL

The Art of Affiliating