Every day in a San Diego lab, raw material derived from donated tissue unsuitable for organ transplantation goes into a machine, and three-dimensional human liver tissue is printed out.

Pioneered by a company called Organovo, this 3-D bioprinting technology may one day achieve the Holy Grail of its industry: the manufacturing of whole human organs to replace damaged ones. But for now, it’s already making an impact on human health, as pharmaceutical and biotech companies are using its manufactured human liver tissue to test the toxicity of new drugs and therapies.

Organovo is developing multiple tissue types for therapeutic use, with strong early results in animal models. In three to five years, there’s a good chance that it will have an Investigational New Drug Application in at least one tissue. The company’s strategic plan is coming to fruition just as its chief scientific officer, Sharon Presnell, envisioned when she joined the startup in 2011. 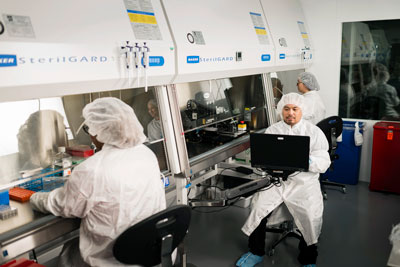 With an extensive background in cellular biology, Presnell has previously worked for various large, established companies and startups in the healthcare arena. During her career, she developed business savvy to go along with biotechnical expertise, making her a key bridge between Organovo’s research activities and business development.

She’s also the driving force behind a new subsidiary that supplies Organovo with the raw material for bioprinting, helming this spinoff as its president. For a startup aiming to open new avenues for drug research and disease therapy, Presnell believes the business side of the operation is as important as the research work. She speaks with enthusiasm on providing leadership for both.

The Life of a Cell at Organovo

To ensure that quality, healthy cells procured
from Samsara make it to the bioprinters of Organovo, researchers must carefully follow these steps:

University or organ-procurement-organization partners ensure that properly consented tissues not suitable for transplantation are distributed in support of scientific research.

Whole tissues are processed to generate multiple specific subpopulations of cells. This usually involves exposing the tissue to enzymes that gently break down the extracellular matrix in the tissue, which liberates individual cells.

Once the tissue is dissociated into a cell mixture, the various cell types are usually separated so that they can be used as purified populations or recombined in a controlled way, like bioprinting.

Isolated cells are frozen to create banks of each cell type that can be used as stock raw materials.

Each cell type is characterized to assess viability, phenotype, and function after thawing.

Lots of cells are provided to Organovo to determine if they are suitable for bioprinting. This usually involves an assessment of whether the cells can properly form bioink (the cell mixture that is loaded onto the bioprinter for tissue production).

Surplus cells and many other cells unsuitable for bioprinting are distributed to other researchers.

Organovo’s roots trace back to the work of Dr. Gabor Forgacs, a theoretical physicist who studied chicken wing development at the University of Missouri. He developed a way to take aggregates of cells and place them at finite distances from each other so that he could understand how they communicated over that distance, and how different cells coordinated to make a chicken wing. He modified an old plotter with a movable arm to make the device distribute cell groups in three-dimensional patterns, realized that he could use this technique to make tissue structures, and filed for a patent.

In 2007, Keith Murphy, a former Amgen executive, and Dr. Eric David, a former McKinsey & Company associate partner, licensed Forgacs’s technology and formed Organovo. The company’s first major development was the fabrication of an industrial-grade prototype of the bioprinter in September 2009.

The past twelve months have been especially eventful for Organovo, as customers publicly shared evidence of the efficacy of its tissue products in pharmaceutical toxicology studies. At the March 2016 annual meeting of the Society of Toxicology, a representative from Bristol-Myers Squibb presented data regarding the drug maker’s discovery that a particular compound could damage some patients’ livers in tests using Organovo’s tissue. Conventional toxicity testing in two-dimensional cell culture models and in animals did not show this impact. “Customers telling these kinds of stories build credibility and help drive our business,” Presnell says.

Now, it’s possible for drug companies to test their products on living human tissue before any conventional human drug trials. With Organovo’s 3-D liver tissue enabling more reliable drug toxicity studies, the product could speed up drug development—a huge benefit for pharmaceutical companies. Researchers are using its products to learn more about cancer and other diseases.

Another avenue for Organovo’s growth is the use of bioprinted tissue to test the toxicity of chemicals. The cosmetic brand L’Oreal has partnered with Organovo on developing bioprinted skin tissue. Presnell also points to the recently updated Toxic Sources Control Act, which expands the Environmental Protection Agency’s authority to obtain testing information for chemicals and promotes the use of nonanimal testing methodologies. This update may increase demand for bioprinted tissue in toxicity testing.

Janel Lancaster Works with a Mission in Mind

Toxicity testing has yielded Organovo’s first revenue stream. This income is a real advantage for a biotech startup, Presnell says. Young companies, even ones working on breakthrough science, can lose focus if they are constantly worried about where money is going to come from in order to remain in operation. Presnell had seen this impact on other companies first-hand, so the potential for Organovo to have a saleable product within a few years drew her to the company.

Presnell seized the opportunity to open another avenue of income and solve a supply problem about two years ago with the foundation of Samsara Sciences, Inc. As Organovo prepared to step up production of 3-D liver tissue, it had difficulty obtaining supplies of high-quality adult liver cells—the raw material required for the beginning of the bioprinting process. In some cases, certain types of cells were either not available on the market or didn’t work reliably in Organovo’s labs.

Realizing that the company had the expertise to start producing its own primary liver cells, Presnell made the case for Organovo to do this work themselves. This would solve the supply problem, and give the company control over the cost of its key raw material. It would also allow the company to sell surplus liver cells that it produces to other biotech firms and research labs.

Samsara, a wholly owned subsidiary of Organovo, was born in May 2015, with Presnell serving as president.

Samsara began production in January 2016, and its primary function to date has been to supply Organovo with a steady supply of high-quality liver cells—not just hepatocytes, but also the other specialized cell types found within the liver. It is scheduled to do the same for other cells. Samsara’s sale of surplus material is an area of great promise. “We have unique expertise in this area, and we can be a strong player over time,” Presnell says.

Organovo’s next big breakthrough could be synthesizing larger portions of the liver and kidney for implementation into the human body. This therapy would effectively augment the functionality of an organ. “In the next couple of years, we’ll begin to see preclinical evidence of what is possible,” Presnell says. “We’ve already seen some profound things in animals. In three to five years, it’s possible we’ll begin to see testing in humans.”

The actual benefits to this therapy depend on how invasive the implantation procedure will be—a factor that will become clearer after human testing. “Even if it’s not perfect, and even if it doesn’t last forever, there can still be a clinical benefit,” Presnell says. If it were to work for a year, for instance, that could mean a patient can be taken off of dialysis for a year and be removed from the transplant list.

The ultimate solution for failing livers and kidneys—bioprinting the entire organ—could one day be created in Organovo’s labs. That development is likely decades away, but Presnell believes it will occur during her lifetime. It’s a daunting technological problem, however; the kidney, for example, has twenty-five cell types, and a replacement organ has to be completely formed prior to a transplant.

“The entire liver or kidney has to have the complete vascular system the moment it is implanted in the body,” Presnell says. If researchers can produce each cell type and create a working organ, it would be a historic medical breakthrough that could save tens of thousands of lives each year.

While organ transplants from donors can be highly successful life-saving procedures, there are not enough donated organs to satisfy need. Each year, about 30,000 tissue donors save and heal lives in the United States, but an average of twenty-one people still die each day because not enough organs are available, according to the United Network for Organ Sharing.

Presnell, who says she is “a cell biologist at heart,” relishes the opportunity to help lead a company pursuing extraordinary medical breakthroughs. The excitement around the technology presents an unusual test. “A big part of the management challenge here is that the platform is capable of so many things, so you have to stay focused on the things that are really going to be the game changers and not get distracted by the tangential,” she says. “It’s about maintaining the enthusiasm—and curbing the enthusiasm.”

Presnell has no trouble keeping up her fervor for her work. Her position as an executive overseeing most of the steps in the development of game-changing biomedical products is one of a cell biologist’s dreams. AHL

Armond Kinsey On How Diversity Makes a Difference

Ted Borgstadt Has a Passion for Holistic Health